PVC – the oldest plastic material with a wide range of applications

Poly (vinyl chloride) (PVC, [-CH2-CHCl-]n) was discovered almost one hundred years ago.It is widely used in different branches of the economy, and its production continues to grow.Despite the vast amount of research relating to its production, modification, processing or recirculation, it is still an interesting object of study.
The popularity and the high demand for polyvinyl chloride in Europe in 2014 was widely reported, but the forecasts of growth in the construction industry, which is a major driver of demand for PVC, talks about a 2% increase in demand in 2015.

PVC is the first synthetic thermoplastic material produced on an industrial scale.At the same time it is one of a few polymers which has such a vast array of modern applications despite having being discovered such a long time ago.Mixed with plasticisers, stabilisers, impact modifiers, fillers and others, it is processed into finished products by means of various techniques, which will be discussed in subsequent articles.It is a polymeric material, the modification of which in the synthesis stage is fairly simple due to the sensitivity of PVC’s parameter’s to change, hence its wide scope of applications.

The history of PVC

PVC is as old as polymers science itself. It is one of the oldest synthetic materials with the longest history of industrial production.The development of the production of plastics, including PVC, started in the first half of the 19th century in the laboratories of Justus von Liebig in Gießen.In as early as 1835, Henry Victor Regnault discovered that a white powder, later referred to as polyvinyl chloride, precipitated from a mixture of ethylene dichloride and an alcoholic solution of potassium hydroxide exposed to sunlight in a flask placed by the window.About 40 years later, in 1872, Baumann described the phenomenon of transformation (under the influence of sunlight) of liquid vinyl chloride enclosed in tubes into powder.The process which Baumman carried out involved exposure of the vinyl chloride-containing flasks to sunlight.  This is how the first ever plastic material was made.However, may years had to pass since the first patents for the production of PVC came out. This happened in 1912 thanks to Fritz Klatte, who developed a method for the synthesis of vinyl chloride by means of adding hydrogen chloride to acetylene.At the beginning of the thirties of the 19th century, the first pilot lines for the production of polyvinyl chloride were set in motion in Germany and the USA.W.L. Semon obtained the first plasticised polyvinyl chloride by combining it with the high boiling tritolyl phosphate.World War II and the military’s demand for materials for cable insulation, as well as the development of coated materials softened with leather-imitating PVC made for the automotive industry (e.g. ICI Co. in 1941 was the first to use PVC-covered material on London’s busses) caused that in 1948, all the standard PVC polymer types, i.e. suspension, emulsion and paste PVCs, were already available.

PVC production is relatively cheap.Polyvinyl chloride is resistant to corrosion and chemicals as well as to atmospheric conditions.It is smooth, does not conduct electricity, is recyclable and has low heat conductivity.Basic PVC polymer is a white powder with a softening point of approx.80oC and is resistant tohydrochloric, sulphuric and nitrogen (diluted) acids as well as other substances such as diluted sodium and potassium hydroxides, oils, water, alcohol and gasoline.  It dissolves in ketones (acetone, cyclohexanone, etc.), esters, tetrahydrofuran, dioxane, pyridine, toluene, xylene, ethylene chloride, carbon disulfide, and dimethylformamide (unplasticized only in cyclohexanone and tetrahydrofuran). 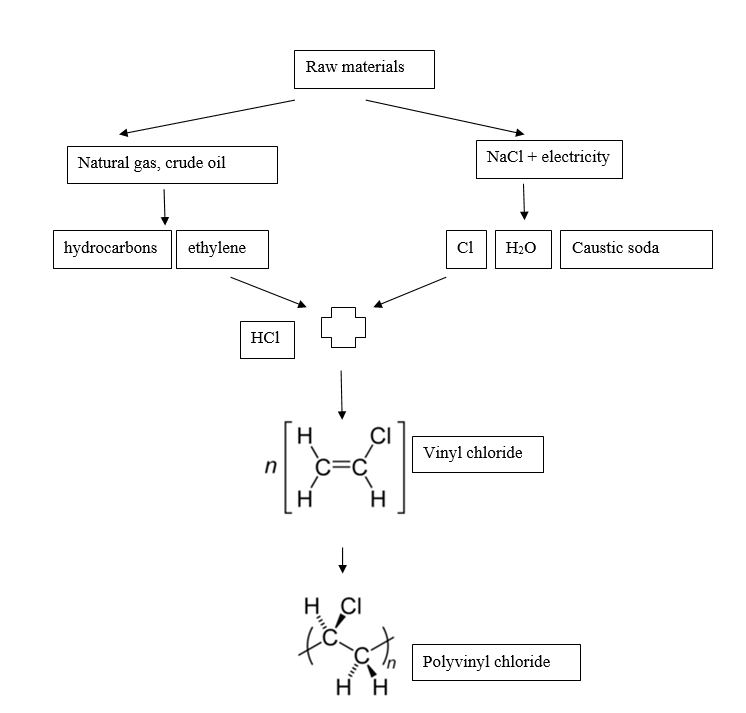 Various physical properties are achieved depending on the PVC polymerisation method.E-PVC obtained by means of emulsion polymerisation has the transparency and absorbability of water and electrical insulating properties which are inferior to S-PVC and M-PVC obtained by means of suspension and mass polymerisation.S-PVC and M-PVC, thanks to the way they are obtained, are very clean products.A vast majority (ca.90%) of the PVC produced is a polymer obtained via the suspension method (PVC-S).
Only 6-8% of the plastic is obtained via emulsion polymerisation (PVC-E) and is most often processed as a paste.Around two-thirds of PVC-S is then made into unplasticised, hard PVC-U, while the rest into plasticised PVC-P.

Types of PVCs and their applications

Due to the different properties of vinyl polychloride, it is used in a wide variety of applications.The main consumer of PVC is the construction industry with all its infrastructure.The construction sector constitutes two thirds of the PVC market, where it is used to make water pipes, fittings, electrical insulation, window frames, window blinds, gutters as well as wall and floor panels.

The scale of its use, especially in construction, derives primarily from the above mentioned functional and economic properties, as well as its safety and its construction traits which include longevity  and resistance to destructive environmental factors such as chemicals and the elements.

The industrial history of polyvinyl chloride is over 90 years old.In this period, PVC has managed to gain a strong market standing and is currently a key raw material used in the production of a variety of polyvinyl chloride materials.The range of its application is so wide that many areas of our present-day economy would no longer be able to function without PVC.A constant rise in demand for this raw material is why research is underway to develop more effective vinyl chloride polymerisation methods (VCM) and obtain PVCs with increasingly better processing and functional properties.The great importance of PVC for the economy stems primarily from the availability of raw materials, its low production costs and its functional advantages.

PVC is very easily modified, hence the properties of polyvinyl chloride materials produced from this polymer can easily be adjusted to various requirements depending on the planned end-use.Modification is achieved through proper selection of the PVC mixture’s ingredients, which will be discussed in the articles to come.